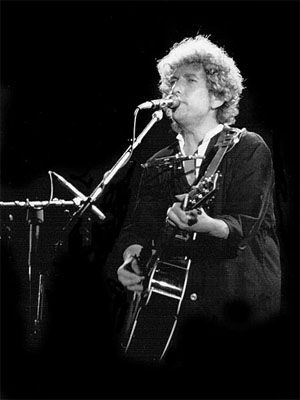 On Thursday 13 October, the name of the recipient of the Nobel Prize in Literature was announced: Bob Dylan, "for having created new poetic expressions within the great American song tradition". Public responses have been since then varied and have raised controversy. Being the first American since Toni Morrison (1993) to be awarded the prize, many authors and literary critics have argued that other American writers such as Philip Roth or Cormac McCarthy—, if it had to be an American, —were better suited than Dylan to win. Still, the musician and songwriter was proclaimed winner, which illustrates the open-mindedness of the Academy towards other literary or musical-poetic forms of expression.

Although the troubadour published the first part of his memoir Chronicles in 2004, he was awarded the prize for his contribution to ‘the great American song tradition’, therefore for his lyrics. Nevertheless, it might be worth stressing that there is a close relation between his lyrics and modern American literature. Considering that he was influenced by the Beat Generation, by those post-World War II poets and writers—like Allen Ginsberg or Jack Kerouac—who promoted anti-conformity and spontaneity in writing, Dylan was often referred to as a “beatnik” during the late 1960s. Two particular songs, both being part of his fifth album entitled Bring It All Back Home (1965), perfectly exemplify his powerful “beat” songwriting: “Subterranean Homesick Blues” and “It’s Alright, Ma (I’m Only Bleeding)”. Stringing together alliterations and a solid stream of consciousness technique, these two songs display the fresh and free writing that had been previously made popular by beat writers. In addition, however confusing they may sound, their lyrics might increase the possibilities of emotional identification. Indeed, as he rapidly articulates rambling thoughts, Dylan manages to distance himself from his text and indirectly from his audience, which allows us to connect with the lyrics and perhaps even to discover some higher truth. 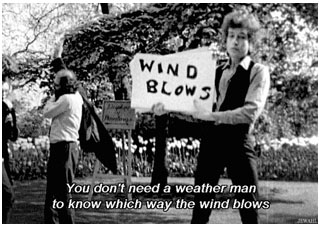 Dylan has also concealed—and revealed—a plethora of politico-social messages in his songs. For instance, preaching like a prophet in “A Hard Rain’s A-Gonna Fall”, he merges his poetic expression with biblical references and illustrates how mankind has been corrupting its heart and its home. In other words, he predicts a “hard rain”, a flood that would wipe out the wrongs of modern society. In “License to Kill”, he uses the character of “a woman on [his] block” to denounce man’s blind determination to dominate and destroy as “he [is] hell-bent for destruction” and “wants it all and wants it his way”. Notwithstanding the songwriter’s denial of any political implication, his lyrics are opened to various interpretations and may have raised consciousness on politico-social issues all over the world.

But Dylan’s songs have also conveyed an impressive use of narrative techniques. In his more recent album Tempest (2013), besides his accomplished writing style as he juggles literary devices such as metaphors, allegories or wordplays, Dylan also shows his skills in storytelling. For example, in its eponymous song, which lasts fourteen minutes and is composed of forty-five quatrains, the music accompanies Dylan’s words that tell the story of the slowly sailing and soon-to-sink Titanic. This narrative achievement is aligned with classics such as his love song “Tangled Up in Blue”, his beautiful ballad “I Want You” or the still haunting “Hurricane”.

In conclusion, since there is no Nobel Prize in Music, the Academy granted the award to someone who masters both the fourth art and the fifth art. In fact, Bob Dylan has proved once again that barriers between arts can be broken. He did not only take over the American folk song tradition after Woody Guthrie, but brought further meaning, politico-social messages and poetic expression to it. Dylan’s songs are written and structured like poems and appeal to universal human experience. In short, as Bruce Springsteen mentioned during his induction speech for Dylan at the Rock and Roll Hall of Fame in 1988, Bod Dylan “freed [our] mind”, which, after all, might be all literature is about.